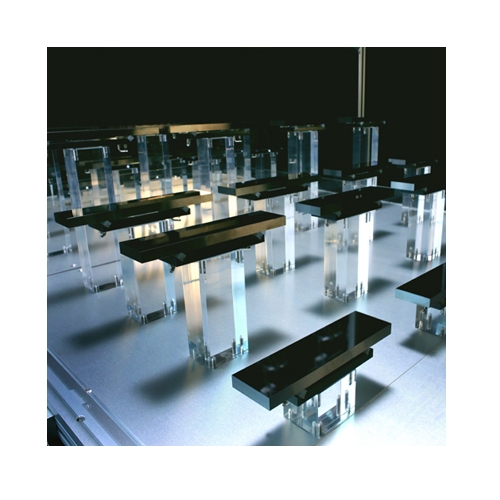 The Bearings Glocken II will be on exhibit in Turkey at the Japan Media Arts Festival, Istanbul 2010, being held this summer. This is the successor to the first Bearings Glocken originally built in 2006 to commemorate the 90th anniversary of the founding of NSK.

The exhibition is held as part of the efforts by Japan’s Agency for Cultural Affairs to introduce the attractions of some of Japan’s most advanced media art to an international audience. This year’s Japan Media Arts Festival in Istanbul marks the fifth exhibition of this kind.

Set in Istanbul, a city with a long history at the crossroads of diverse cultures, the Japan Media Arts Festival, Istanbul 2010, is organised on the dual theme of the Creative Mind and the Narrative Mind. The festival will be showcasing a diverse range of works in animation and comic book art that represent the media art of Japan. And, for its part, the Bearings Glocken II will be on display to provide both sights and sounds.

Bearings are a mechanical component designed to enable machines to rotate smoothly by reducing friction. Based on a unique concept, the instrument Bearings Glocken was created to make the general public more familiar with bearings and with their benefits for the environment.

Jointly developed by artist Kohske Kawase and NSK Ltd., the Bearings Glocken showcases the steel bearing ball, a component that is rarely visible since it is incorporated into machines. The steel bearing balls, which are considered to be the most perfect spheres on earth, create music by bouncing across the keyboard as part of a visual and audio performance.

The Bearings Glocken II boasts a repertoire of five musical pieces that have been rearranged to further enhance the musical enjoyment.

Composer, Artist Born in 1970 in Kyoto, Japan.
Kohske Kawase creates music for use in commercials, television programs, on websites and for events such as contemporary ballet performances. In 2002, Kawase began creating artistic works combining light and images with sound.

The Bearings Glocken became a big hit for its automated glockenspiel performances using steel bearing balls at the “Machines with a Heart” event held at the BankART1929 Yokohama in 2008.

Kohske Kawase has produced some of the music (Kaiji Moriyama’s “The Dancing Inner Organs,” and others) used in the NHK Educational TV programs "Karada de asobo (Let`s Exercise, 2008)” and “Asa da! Kara da! (It’s Morning! It’s Time for the Body!, 2009)”. Kawase pursues artistic endeavors that have breadth and depth irrespective of the actual form of artistic expression.

Kawase also participated in the “Artist Exchange Program 2009 between Taipei and Yokohama” held at the beginning of 2009. During his stay in Taipei City, Taiwan, he created new art works and gave a solo show. The Bearings Glocken II exhibition was a hit at the 13th Japan Media Arts Festival and was even selected as one of the Art Division Jury Recommended Works in 2009.