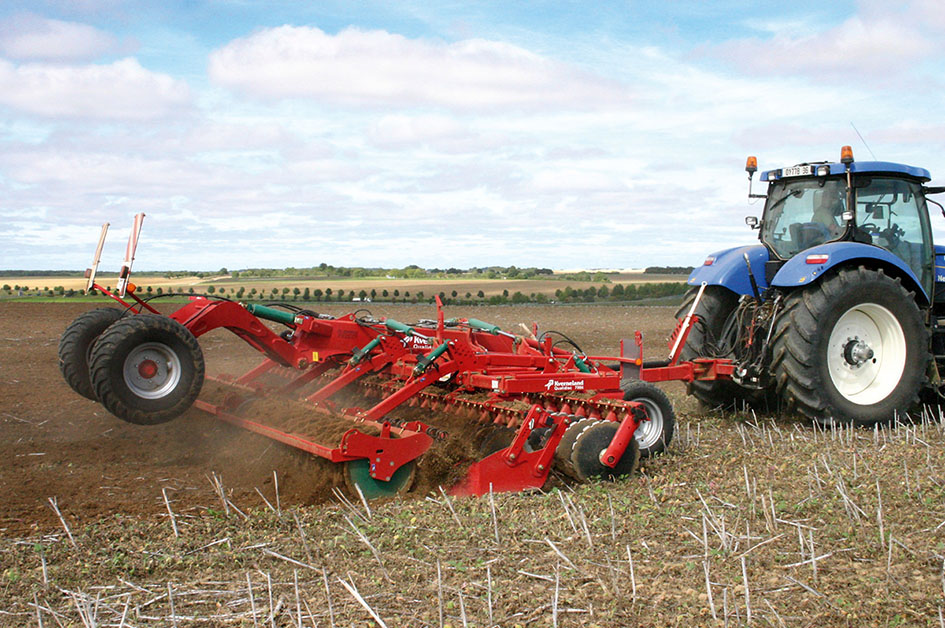 The advantages of application-specific bespoke bearings

When the going gets tough:

Severe mechanical strain and abrasive particles in the operating environment: bearings for agricultural machinery have to work in conditions which are far from ideal. Standard products are often unsuitable in these cases because they have a very limited service life. However, bearings are available which have been developed specially for agricultural machinery and mounted implements. Joint development projects by bearing and machinery manufacturers focus on reliable seals and component integration.

Taking a closer look at one particular mounted farming implement is a good way to illustrate the demands placed on bearings units in the field of agricultural engineering. Harrows are used to prepare the soil for sowing. They have disc-shaped attachments which run through the soil and thoroughly mix the uppermost layer to create a consistent seedbed. The discs have to rotate regardless of the terrain, so easy running is a key criterion.

Customised angular-contact ball bearings for compact disc harrows
It should come as no surprise that the ambient conditions for bearings in the individual discs are far from favourable. Harrows work in dirty, dusty environments, so the bearing’s seal has to be highly effective. They also travel across uneven ground at speeds of 10 to 15 km/h and have to withstand knocks from stones in the earth at the same time.

Harrows whose discs are connected with the base frame individually via support arms pose a particular challenge for bearings. This design has various advantages, such as a substantially higher working speed, which is why farmers prefer the individual disc suspension system used by so-called compact disc harrows. However, the individual discs are subject to high axial forces, which the bearings must be capable of absorbing.

The latest trend: component integration
A leading harrow manufacturer asked NSK to develop a customised design so as to ensure ultra-long-lasting bearings in these rough conditions. NSK’s designers chose a double-row angular-contact ball bearing with a split inner ring that can absorb high axial and tilting forces thanks to its construction. The bearing used for the customised unit performs particularly well in this regard because the contact angle has been increased to 40o.

Easy mounting: an important consideration
The bearing is accommodated in a ready-to-mount housing unit which is also supplied by NSK. This forms the whole unit between the disc and the mount. On the disc side, the bearing units are affixed using a flange with five screws. The bearings’ inner rings are connected to the axle, which is inserted into the mount and fixed to the disc support by a nut. With this unit, no other components are needed to hold the individual discs in place.

Maintenance-free design with lifelong lubrication
A highly effective seal is one of the key requirements for this bearing unit. On the disc side, a static seal is used. On the other side, there is a static seal next to the bearing unit, then a dynamic seal with two sealing lips between the bearing unit and the disc support. This seal system has proved highly effective, even faced with extreme contamination, moisture and abrasive or corrosive soil components such as sand and fertiliser.

Although they are subject to an immense amount of strain, the bearings are maintenance-free and do not need relubricating. The housing is filled with a special high-performance grease which can absorb a great deal of pressure and remains effective throughout the bearing’s lifespan. This means there is no need for the relubrication option usually offered. As well as saving time and grease, this is good for the environment because it ensures that no lubricant can escape from the bearing unit.

Flanged bearings for combined cultivators and seed sowers
Once the soil has been prepared, the seed is sown. Like many sectors, agriculture too is experiencing a trend towards growing mechanisation and automation. It is therefore logical for manufacturers to try and combine several stages of the farming process. One maker of mounted farming implements has succeeded in doing just this by developing an innovative machine which cultivates the soil and also sows seed.

Here too, a great deal of dust is produced and the components are subject to substantial mechanical strain. NSK has also developed a flanged bearing unit for this application. In this unit, the seal is supported by an upstream centrifugal disc. A snug-fitting three-part seal creates an effective barrier in the adverse conditions this machine operates in. Like the customised bearing for harrows, this one is supplied with maximum grease packing to render relubrication unnecessary and guarantee lifelong lubrication.

The combination of a centrifugal disc and a three-part seal makes a long life possible in very dusty conditions. On top of all this, NSK was able to increase the load rating by 30% compared to the bearing unit which was previously used.

Pulleys for rotary swathers
One manufacturer of mounted implements for agricultural machinery was working on developing a new series of rotary swathers, which are used to collect crops such as hay and straw. Initial tests showed that the pulleys in the new series soon failed. Action had to be taken, so the manufacturer turned to NSK for help.

The lubricant also had to be optimised. Instead of standard grease, specially developed MA7 grease is used, which extends the bearings’ life by some 10% in adverse environments. NSK was soon able to supply the first samples. The test phase was absolutely satisfactory, so the manufacturer approved the prototypes for mass production after just six weeks.

This results in an optimum compromise between the two development objectives, i.e. energy efficiency and absorbing high loads. A spacer ensures that play between the two inner rings does not exceed the desired range of tolerance and also prevents corrosion in this critical area.

Conclusion: alternatives to the standard range
The examples show that agricultural machinery makes above-average demands of bearings and pulleys as it often operates in adverse conditions and under severe mechanical strain. For this reason, it is often a good idea to use customised bearings, e.g. with improved seals (triple-lip seals, centrifugal discs).

The user benefits from longer bearing service lives, while the equipment manufacturer often achieves additional functionality with these bearings and can make fitting easier by using mounted units and flanged bearings, for instance. Manufacturers are well aware of the advantages: NSK is registering a sharp increase in demand for bespoke bearings for mobile machines.

Bespoke bearings made in Germany

Although the various bearing suppliers have a wide range of standard components, many users in the mechanical engineering, plant construction and automotive industries know that a bespoke bearing is often a better solution. However, they often have reservations regarding time and expense. To eliminate these reservations, NSK has set up its Munderkingen plant to deal with the flexible development and production of such bespoke designs.

Engineers in the development department translate the specific requirements into a design proposal and can often adapt existing basic constructions, which saves time. A high-performance prototype manufacturer produces the first samples, which can then be tested extensively by both NSK and its client. Next, the components are made on flexible production lines which enable smaller runs to be manufactured cost-effectively. The same applies to components which may at first seem unrelated to bearings, such as flanged blocks.

Here is an example. In the case above where NSK produced pulleys for rotary swathers, the company was able to supply prototypes and initial mass-produced components within a matter of weeks. This was thanks to its efficiency and its flexible production facilities.