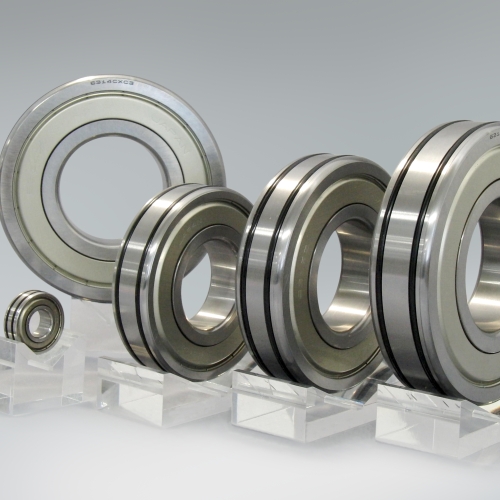 NSK Ltd. has expanded its Creep-Free™ bearing series lineup.
These bearings are widely used in fan and pump motors to prevent creep. This series of bearings is designed with exceptional creep resistance, which helps improve motor maintenance and assembly performance.

Due to the constraints of assembly, motor bearings are often used with a clearance fit*1 between the outer race and the housing. Depending on the usage conditions, if rotational load*2 is exerted on the bearing, a slip phenomenon called creep can occur between the housing and the bearing, which results in wear that can reduce the life of the bearing. In 2007, NSK launched its Creep-Free™ series of bearings of an inner diameter (ID) of 45 mm or smaller. This series has been very well received by our customers. In response to the needs from our customer base for the same kind of bearings for larger, higher output power motors, NSK has expanded its lineup to an ID of 100mm.

Improved creep resistance under high temperatures for longer maintenance intervals
By applying a material that achieves 80% less permanent distortion in the O-ring in high temperature conditions (compared to conventional material), NSK has succeeded in achieving and maintaining a stable level of creep resistance, since there is less dimensional change due to O-ring fatigue. As a result, the maintenance interval for motors will be extended.

Superior oil resistance for greater lubrication options during bearing assembly
By applying an O-ring material that achieves 87% less dimensional changes due to swelling induced by ester grease, NSK has succeeded in making it possible to use ester grease, which has high heat resistance, for the outer diameter of the bearing and inner diameter of the housing. In this way, NSK has increased the number of lubrication options.

*1 clearance fit: Installing with a gap between the bearing and housing.
*2 rotational load:  Radial load that changes direction with the rotating shaft.