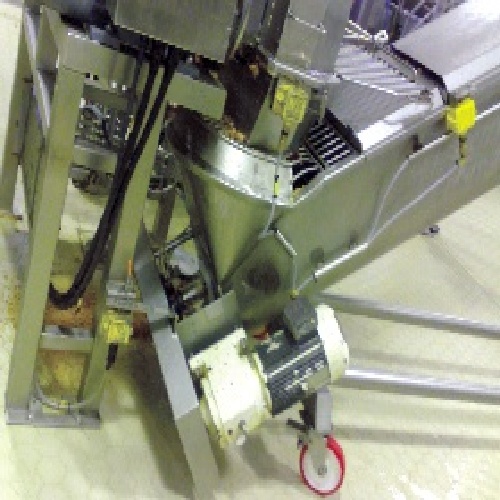 NSK’s ability to provide cost saving solutions in the food and beverage industrie was demonstrated on a food conveying auger that was suffering from contamination – metal debris - as a result of water ingress into its bottom support bearings. By providing a solution to this problem with its triple-lip sealed bearings, NSK has saved the food producer £77,179 per year in lost production time, plus the cost of new bearings, labour and engineering support.

The situation prior to NSK’s involvement was that the food producer was losing vast amounts of production time as a result of the failure of bottom support bearings on the conveying auger. The resulting downtime costs, plus the costs of replacement bearings and the labour to fit them, were running into tens-of- thousands of pounds annually.

Clearly these costs were unsustainable, so an initiative was launched with a view to sourcing more durable bearings. As part of this initiative, engineers from NSK were called in to give advice. NSK runs a cost saving programme within its AIP - Asset ImprovementProgramme - system, across all major market sectors. The programme is designed for end-user bearing customers that are looking for a value-added service which helps to improve reliability, reduce operating costs, and improve efficiency and profitability. These objectives are achieved by delivering tangible savings to assets, such as equipment and machinery, and also by improving the working knowledge of maintenance and engineering personnel.

Following the initial contact, NSK engineers visited the food processing facility and identified the water ingress problem. In order to eliminate the problem they suggested a solution using NSK’s triple-lip sealed ball bearing units. These bearings are designed for the most demanding operating environments, forexample they were originally used on agricultural machinery.

The triple-lip sealed bearings were installed on the food conveying auger, and trials conducted over a 12- month period; at the end of which there were no reported failures. On the strength of this performance the triple-lip sealed bearings have been adopted generally by the customer, and are currently in use on several food conveying augers at the plant.